Israel Under Fire - A view From Within 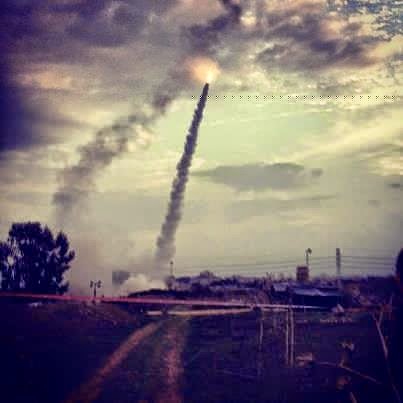 Dear Friends,
I write this post from Kibbutz Sasa near Tsfat in the far north in Israel.  For the past two days, after the majority of participants in our congregational trip have returned to the US, Sue and I have been visiting family here.  We are scheduled to fly to the States tomorrow night at 11:30 PM.  We feel very safe and are far away from the events unfolding in the South and Center of the country where Hamas terrorists have been launching rockets at Israel and the IDF has been responding with Operation "Protective Edge."  Since midnight last night, over 150 rockets have been fired from Gaza into Israel.  Not only have cities close to Gaza such as Ashdod and Sderot been targeted, but also Tel Aviv, Jerusalem, Beer Sheva, Hadera and other cities in the Center of the country as well.  Thank God, no casualties have been reported.  Israel's Iron Dome missile batteries have intercepted several rockets and others have fallen harmlessly in unpopulated areas. In response, the IDF has been targeting terror targets in Gaza.  Things are very tense here, as you might imagine, but all of Israel is united in support of their soldiers.
I spoke earlier this evening with Phyllis Adler, Director of CAJE, about the 70+ students from Denver who are participating in the Israel Study Tour (IST).  The group is currently in Netanya and they are safely ensconced in a hotel there.   While the group had hoped to travel to Jerusalem and Tel Aviv for the last few days of their trip (they are scheduled to leave on Sunday), their itinerary has been changed in order to keep them in the North and out of the possibility of being in harm's way.  Sue and I plan to stop in Netanya tomorrow on our way back from Sasa in order to spend some time with the ISTers before we leave for the airport.  I am sure that the experience of being in Israel at a time of crisis, while certainly not what we would have hoped for them, will give them a unique perspective about the realities of living in the Jewish State.
So much has happened over the last two weeks that it is almost impossible to try to put it all into perspective.  We are still glowing from the amazing sites and individuals that everybody on our congregational trip experienced.  We all saw an Israel that is beautiful, passionate and filled with cultural, historical, entrepreneurial and spiritual depth.  And yet, as we all know, Israel is not perfect.  It is vitally important to understand that recent events - the murders of 4 innocent youths by extremists - both Arab and Jew  - while important to address, are not in the forefront of most of our minds at this time.  The current military action in response to Hamas' terror attacks has placed everything else on the back burner.  And yet, nothing happens in a vacuum.  The fact that racist rhetoric, base hatred and a climate filled with tension and fear have fueled extremist behavior on both sides of the conflict cannot be swept under the rug of public discourse.  It is obvious that the status quo cannot be sustainable into the future.
I look forward to sharing our experiences and my thoughts with you this Friday night at services. I hope to see you there.
I conclude with a prayer for peace:
עשה שלום במרומו, הוא יעשה שלום עלינו ועל כל ישראל, ואמרו אמן.
May the One who makes peace in places far beyond our understanding, send peace to us and to all Israel.  And let us say - Amen.
Pray for the peace of Jerusalem.
שלום מישראל - Shalom M'yisrael - Shalom from Israel
Rabbi Joe Black
Posted by Rabbi Joe Black at 4:07 PM