In a few weeks, we will be kindling the candles on our Chanukiot (Chanukah Menorahs.)  There is an interesting argument in the Talmud between the Schools of Hillel and Shammai regarding the proper way to light the Chanukiah.  Shammai contends that we begin with eight lights and remove one each night.  Hillel says the opposite – we begin with one and add more until the last night is the brightest.  The law, of course, follows the school of Hillel – and yet, in order to show respect to Shammai, we light the candles from left to right – instead of right to left.

Lately, I’ve been thinking a lot about lighting candles. As many of you know, my father, Sidney Black died and was buried last month in Chicago.  Immediately upon returning from the cemetery, my family and I lit a Shiva Candle that burned for seven days.  We spent the first half of the shiva in Chicago and the second half here in Denver.  Unlike the Chanukiah which increases in brightness with every added candle.  The light of the Shiva Candle is designed to gradually extinguish itself– a powerful reminder of both of the passage of time and the fragility of our lives and those whom we love.
Over the 25 years of my rabbinate, I have guided many families through periods of mourning.  I have stood by and said prayers when loved ones tear the keriah ribbon – acknowledging the wounds in their hearts.  I have stood at graveside and said kaddish and shuddered at the sound of earth falling on a coffin.  I have helped light Shiva candles and held the hands of those who were saying kaddish for the first time.   Until now, however, I have never had the experience of experiencing the power of allowing others to be there for me in my time of loss.

Like the gradually extinguishing light of the Shiva candle, the path of mourning is designed to help those who grieve to descend to the depths of their emotions and gradually to rise up once again to become part of society.  It is a slow and deliberate process that allows and forces us to confront both

For my family and me, the most powerful aspect of sitting Shiva has been the outpouring of support and love we have experienced from our community.  It was not merely the words that were said to us, but the physical presence of others that reassured us that, although the flame of my father’s life has been extinguished, his memory will still glow in our hearts.
The word, Chanukah means rededication.  The act of mourning can force us to rededicate ourselves to living our lives in keeping with the highest ideals of those whom we remember.  May the light of the Chanukiah help all of us to see the brightness and the beauty of the community in which we live and may it reflect the glow of love that we have been given by those who came before us. 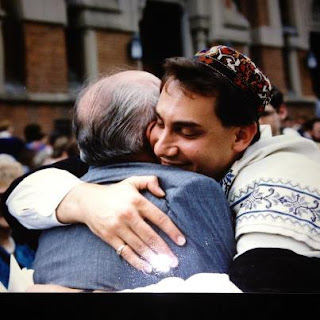 My father, Sidney Black, passed away on November 8, 2011 after a long fight with Alzheimer's disease.  His funeral was  at Beth Emet Synagogue in Evanston, IL.  Sidney was a pillar of Beth Emet.  His love and laughter helped make it a very special place.  These are a few words I spoke at his funeral.

Standing on this pulpit and looking at all of you – many who have been a part of my life and that of my family for so many decades, I’m thinking about the word Yerusha – which means, legacy or inheritance. In many ways, this week’s parasha, Vayera, which contains the powerful text of the Akedah – the binding of Isaac, is all about Yerusha. Abraham and Sarah are promised a son. Isaac is born, then almost taken away. God then reaffirms the promise made to Abraham - guaranteeing that his descendants shall inherit God’s blessing throughout the generations.

Family was everything to my dad. He grew up in the midst of a huge family - it was so big that he sometimes got lost in the shuffle. But he taught us all, through his words, his laughter, his tears and his example how to love and be loved and for that we are grateful and blessed. When he met my Mother and they fell in love – they knew that creating a loving family was one of the most important acts that they could perform. But my parents’ family went beyond blood. So many of you here today – and too many who have died – but whose memories fill this sanctuary – understood that they were part of my father’s family: whether here at Beth Emet, or at the seder table, at the minyan, or any of the myriad ways that he shared his love and joy.

Faith – My father loved being Jewish. He passed that love on to my sister, Nina and to me. And we, have passed it on to our children. He loved the sound of Hebrew and prayer. He loved chanting torah. He loved leading the Minyan here at Beth Emet. He loved studying torah with Herbert Hubert and his shabbat afternoon coffee clatch. He loved going to services and singing along at the top of his lungs. He lived for the opportunity to perform Mitzvot and help others. Acts of G’milut Chasadim – lovingkindess – were part and parcel of everything he did. As far as I’m concerned, he embodied all that was good and holy in our tradition.

Rhythm. My dad always had a song running through his head. This is a trait that he bequeathed to me and my sister Nina and for that I am eternally grateful as well. Until the very end, he was always singing, or whistling, or jangling the change and keys in his pocket to some song. Even towards the end – when his illness had progressed to the point that he hardly recognized any of us – he still responded to and remembered music – especially prayers. Any musical gifts that I have been given are part of this holy yerusha. The rhythm of my father’s life was not only felt through music, however. We felt it in his kindness, in his laughter, in his tears, his caring and his love.

I conclude with a poem I wrote last year after a particularly difficult visit to see my dad as the Alzheimer’s that stole his awareness was taking its toll.

My Father Has Hazel Eyes
My Father has hazel eyes.
I’d like to think when he was younger
He could see a world of wonders
With an emerald sheen
In between
The hardship and the hope
The need to fight or cope
With a panoply of lies.

My father’s skin is smooth
Though easily bruised.
He stares into a distant
Seeing. Not seeing.
Being .  Not being.
Perhaps recalling for an instant
A time
When legs and lips and loins competing
Jingling pocket sounds completing
A trajectory of mine.

My father, always singing
(Telling me that he was there).
With ancient rhythms mingling
Through our home and in the air.
His laughter pierced the sadness
His anger deep below
His love was filled with gladness
And his heart did overflow
His hopes lay in his offspring
And his dreams were locked up tight
With every day an offering
Whistling praises in the night.

My father’s voice is gone now
Like a winter’s lawn now
Or a debt repaid
Or a bed unmade
Waiting to be stripped
A hand that’s lost its grip
On the world that spins around him
Or the people that surround him
Preparing their goodbyes.

My son has hazel eyes.
He sees with intuition,
A clarity of vision
Searching hard for things that matter
Amidst the riffraff and the chatter
In the greenish hues of spring
In the songs he loves to sing
And every day a new surprise.