"You Shall Not Oppress the Stranger." 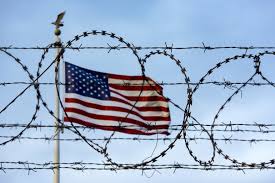 Imagine, if you will, that you work for the Immigration and Naturalization Service of the United States of America. Your job, until a few months ago, was to deal with immigrants who have come to our country illegally and were caught by your coworkers in the process. You have been expertly trained to deal with the exhausted men, women and children who made the difficult decision to leave everything they know, spend all of their savings, expose themselves to unspeakable danger at the hands of ruthless criminals who would think nothing of robbing, raping, or murdering them, trek through blistering heat and bone-chilling cold, and arrive at our border - hoping against hope that by some, miraculous occurrence they might gain entry into a country that they saw as a beacon of light; a place where humanitarian values held sway; a place where they would be able to work very hard and, in the process gain a foothold for a better life - far from the desperation and desolation they left behind. Every day, you see the fear in their eyes and understand their hopelessness, frustration and determination, even though you also were sworn to do your job. You may have children at home whose dependence and trust are the reason you go to work every day- they are the foundation of your gratitude, hope and love.

While you were sworn to defend our borders and prevent unlawful entry, you also have a sense of compassion for your charges’ plight. As a patriot and a loyal American, you can understand why those with nothing left to lose would want to enter into our beautiful nation. Nonetheless, you are also proud of your ability to serve your country and provide a legal, consistent and fair process of law.

Now, I want you to imagine how you might have felt when you learned that the focus of your job had changed overnight. Instead of merely processing these families and ensuring that justice would be served in an orderly fashion, you were now also tasked with being an agent of disruption - ripping children away from anguished mothers and fathers and sending them away to hastily constructed “holding” camps where, after having enduring the unthinkable together, they would now be confronted with cruel separation behind wire fences and armed guards.
You hear their cries:

A dónde llevarás a mis hijos?  (Where are you taking my children?)

And you cannot answer. You hear the desperation of young children calling for their parents. You feel the paralyzing fear of mothers and fathers who cannot help their little ones. You sense their despair and you are sickened and ashamed. You cannot sleep. You look at your own children and cannot avoid seeing their faces superimposed on upon the faces of the little ones whose lives you had just upended earlier in the day.

Suddenly, the job that had given you so much pride just a few days ago has become a nightmare. Instead of being a symbol of hope and promise, you have become an agent of brutality. This is not the America you knew and loved. This is not what you signed up for.

In last week’s Torah portion, Korach, we learn of how a small band of rebels used demagogic rhetoric to attempt a coup against Moses and Aaron. “Is it a small thing that you have taken us out from a land flowing with milk and honey so to kill us here in the wilderness….?” (Numbers 16:13) Korach had the audacity to take the description of the promised land and superimpose it on the bondage of Egypt.

Korach and his minions were adept manipulators. They used hatred, fear and uncertainty to disrupt the people and justify their lust for power. By creating a false sense of nostalgia for a non-existent past, by “making slavery great again” they were guilty of forsaking values for power lust.

This past week, when I heard members of the administration attempt to justify their policy of disruption and cruelty towards immigrants by quoting the Bible, my stomach turned. We have seen this before. Slave owners and Nazis used the exact same verses to justify their evil.

I would recommend that those who seek to find Divine acceptance by cherry-picking from sacred scripture also turn to the words: “You shall not oppress the stranger, for you know the heart of the stranger, having yourselves been strangers in the land of Egypt...” which appears no less than 36 times in the Bible.

I understand that illegal immigration is an important issue. Nonetheless, as a Jew, a patriotic American and as the child of an immigrant who fled from Hitler’s evil, I  am repulsed by what our nation is becoming. I feel for the souls of those tasked with carrying out an inhumane and brutal policy. Their pain, however, is nothing compared to the damage that our government is inflicting on the thousands of traumatized asylum seekers and immigrants – men, women and children - languishing in camps and tent cities established in the name of “safe” borders.

I cannot be silent when I see all that I love about our country being trampled by demagogues whose immoral policies are antithetical to all that I hold dear.