A View From Israel: 3 days In 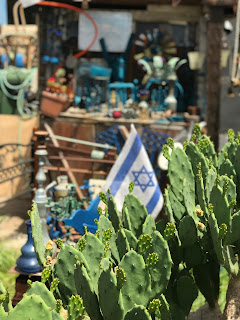 A few initial impressions of our journey thus far.
This week, Sue and I traveled to Israel ahead of our group to spend time with family and dear friends, as well as saving up energy and acclimating before what we know will be a very full and stimulating “Wine, Food and Culture” tour with beloved members of our community.

We spent the first day (my 59th birthday) in Tel Aviv with our dearest friends , Eddie and Noa Goldfine. We had a wonderful dinner at a beach restaurant in Jaffa which was perfect except for the fact that an overly zealous Bazouky player with a PA system loud enough to fill Mile High Station was playing for the 5 patrons who were attempting to dance at the Greek restaurant next door. Since we were all on the beach, and the fore mentioned “musician” (and I use that term loosely...) was not at our restaurant, we were at his mercy and became the unfortunate recipients of his mediocre talent that no amount of Ouzo could have drowned out. (End of rant...welcome to Israel...)

Nonetheless, the food was superb, the ocean breezes were enchanting and the company was first rate.

As things tend to do when sitting with friends over wine, coffee and after dinner birthday cake in Israel, our conversation soon turned to politics. Both Eddie and Noa have a history of falling on the Left side of the Israeli political spectrum. They have been active in multiple left-wing demonstrations over the years and are no fan of Bibi. Thus, when discussions evolved into the US relationship with Israel,  I expected them to be, at best, suspicious of Trump’s motivations and involvement in moving the Israeli Embassy and seemingly walking lock step with Netanyahu.  I was wrong.

Eddie shared (and I paraphrase):  “I have no illusions that Trump is a genius.  He’s not. He does what his advisors tell him to do.  And yet, its refreshing to see a US administration that is not lecturing us on how to run our country.  Moving the Embassy to Jerusalem gave us hope that we are not alone.  Trump is a bully, that’s true - but maybe the world needs a bully right now to deal with all of the other bullies that are out there.”

In other words, most Israelis don’t care about internal American politics.  Russian hacking, attacks on immigrants, people of color, eviscerating Women’s right to choose what to do with their own bodies , the NFL, gun control, corruption, bribes, Stormy Daniels, Fake News and all of the other red flags that have consumed so many of us who have been Stateside over the past 17 months.  All of these things mean little, if anything to Israeli parents who will be sending their children into the army to fight a terrorist enemy who’s main goal is to destroy the Jewish State and the Jewish people.  Israelis want to know if, when push comes to shove, the United States Government will support Israel’s legitimate right to exist. Period. Everything else is secondary.  Politics aside; the optics of Right-Wing Fundamentalist Christian triumphalism broadcast around the world at the Embassy opening aside; the apparent lack of a long-range game plan aside; this decision appears to send the message that many, if not most Israelis want to hear.

Understanding Middle East politics has been likened to drinking from a fire hose.  There is simply too much to take in at once.  Certainly, not all Israelis share the opinions of my dear friends in Tel Aviv.  And yet, it behooves us, as American Jews, to avoid looking for black and white solutions to extremely complex problems.

I write this while watching the sun rise in the Galilee at Kibbutz Sasa - less than a mile from the Lebanese Border.  Sue’s Aunt, Manit Tsoran (z”l) was one of the founders of this kibbutz and her  children live here to this day.  Sasa is one of the most beautiful and tranquil places I have ever experienced. The idyllic kibbutz lifestyle is both spiritually and physically renewing.  Reconnecting with the three generations of cousins who continue to thrive in this special place is a true delight and we look forward to what have become our annual visits with great joy.

And yet, as beautiful as Sasa is, there is also a constant reminder that, less than a mile from where I sit there are over 120,000 Hezbollah missiles trained on Jewish settlements.  The border is relatively quiet today - and there is no sense of immediate danger - but it always lurks beneath the surface. Such is the reality of living in Paradise.

We, who do not face existential threats on a daily basis, have the luxury of debating fine points of policy - and we should. Nonetheless, a good dose of perspective is often needed to help balance out the differences between our societies. As Jews, as lovers of Israel, we are inextricably linked through geography, genealogy, history, theology and time. But it behooves us as well to take a moment to walk in each others’ sandals
Posted by Rabbi Joe Black at 10:49 PM 1 comment: