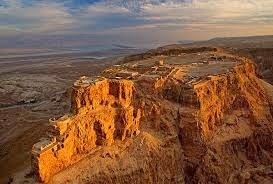 Dear Friends,
This morning we climbed Masada after spending the night in a Beduin-"style" tent.  We woke up very early, packed our bags and drove to the bottom of the Roman ramp.  Most of the group hiked up to the top in time to see the sunrise.  It was inspiring and beautiful.
I have explored Masada several times.  I have studied its history and tried to uncover the many stories it has to tell: from it's origins as a luxurious fortress built by King Herod in the year 3 BCE, to its reclamation as a refuge for Jewish Zealots who fled Jerusalem and its Roman conquerors in the year 70 CE, to the tragic story of it's fall and the death of it's Jewish residents in 73 CE, to it's rediscovery and excavation by Yigal Yadin in the 1960's to its powerful symbolism for a nascent new nation.   The words:  "Masada shall never fall again!"  became a rallying cry for the Zionist pioneers determined to create a new kind of Jew - one who was a fighter, not a victim.
Today, however, Masada took on a whole new meeting for me and everyone in our group.  Today we heard the terrible news that we all feared might be coming, but were afraid to say out loud:  Eyal, Gilad and Naftali were murdered by their terrorist abductors.
For the past two and a half weeks, we hoped against hope that somehow a miracle would take place and that these three innocent young souls would be returned to their families.  But this was not to be the case.  And so, today, an entire nation tragically buried it's precious dead.  The pictures on Israel Television of three flag-draped coffins in a cemetary overflowing with tens of thousands of mourners, grieving parents, somber dignitaries, grieving high school classmates and everyday Israelis from all walks of life told a story of tragic loss that every parent, child and sibling experienced.  Everyone is grieving today in Israel because these three young boys represent everybody's children. 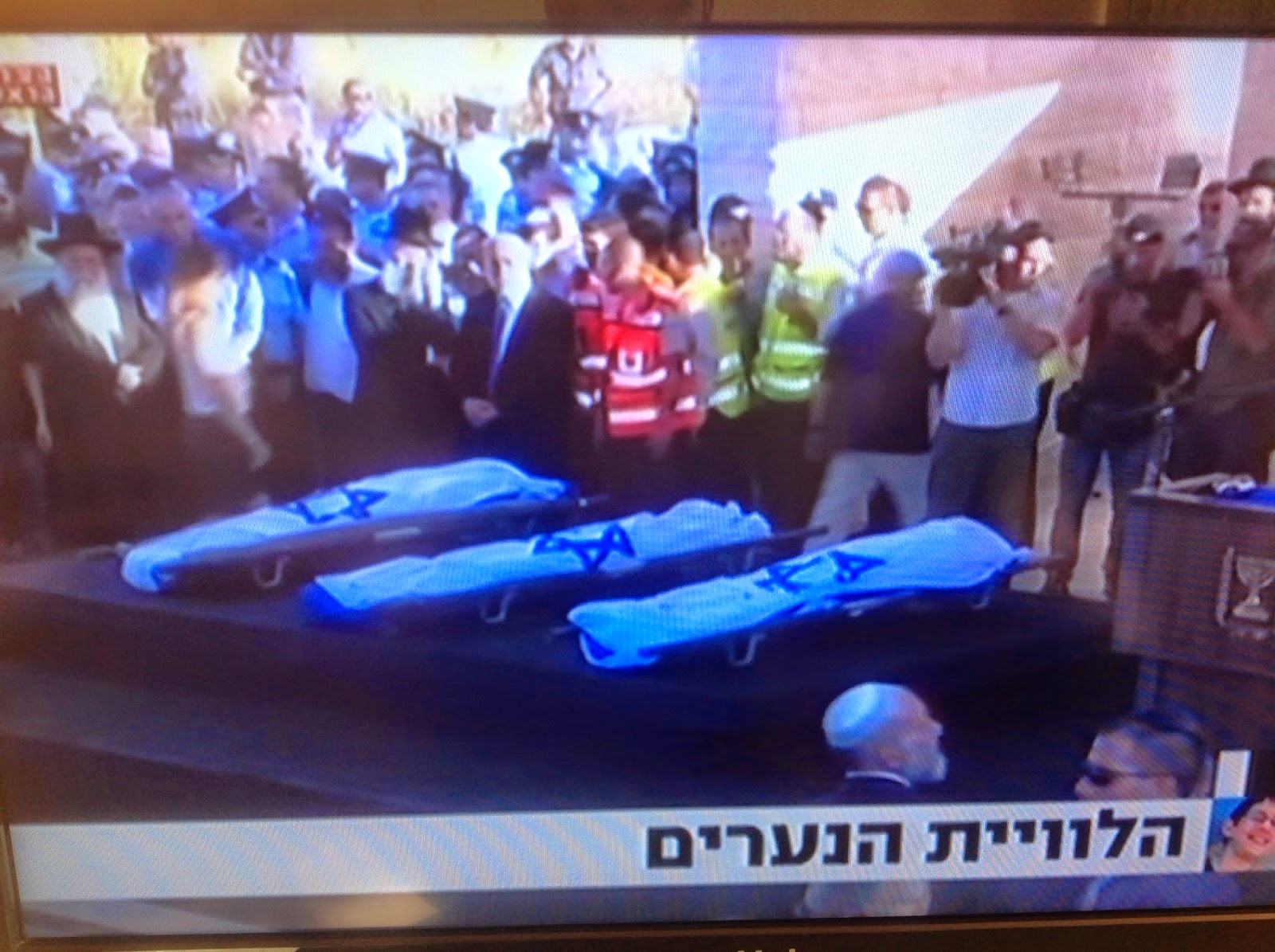 This morning, at the end of our tour, we sat in the ancient synagogue on top of Masada and broke the news to our group.  We chanted the El Malei Rachamim - the prayer for the deceased as well as the mourner's Kaddish.   We also talked about the juxtaposition of this horrible news with our location.  Depending on one's perspective, Masada has a multiplicity if meanings.  For some, it symbolizes Jewish power - our fighting spirit.  For others, it is a symbol of weakness - of Jews who took their own lives (according to Josephus) - rather than standing up and fighting to their deaths.  For still others, Masada is a symbol of Jewish extremism - some scholars believe that the Jews who fled to Masada were the instigators of the Jewish revolt itself.
You can see that Masada means many things to different people.   And yet, one consistent theme is that of Jewish power.  The cold-blooded murder of our children served no purpose other than make us feel powerless:  to instill fear and anger in the hearts of the citizens of the Jewish State.  The way that we respond to this horrific murder is a measure of our values and our character.
Of course, we know all too well that this is not the first time that Israelis have had to respond to an act of terror.  Unfortunately,  it probably will also not be the last  - to our great sorrow. During our brief prayer service on Masada this morning, Yitzhak Sokolov - a dear friend and founder of our tour company - Keshet Israel Educational Tours - shared the following thoughts:
"If the goal of this murder was to scare us into leaving - it will fail.  If the goal of this murder was to goad us into seeking revenge and acting on our basest urges - this too will fail.  Today, we grieve.  Tomorrow we will continue to build our state."
Justice must be served.  Those who are responsible for this heinous act must be punished.  The reality that the perpetrators of these murders were Hamas operatives also exposes the dark reality of who our enemies really are.  And yet, the pursuit of peace can never be relegated to the dark recesses of our fears.  We must rise above our anger, our hatred, and our desire for retaliation.  We must never close the door to peace - so long as we have partners with whom to work.  And if our partners are not readily available  today - we must wait until they emerge tomorrow.
Masada was supposed to have been an impregnable fortress that could never be breached.  We know that this was not the case.  Sometimes, those problems that, at first glance, seem intractable,  can be solved with perseverance and personal interaction.   This is my prayer:  may we find the time to grieve and, in our grief, work for the promise of tomorrow.
Posted by Rabbi Joe Black at 1:31 PM